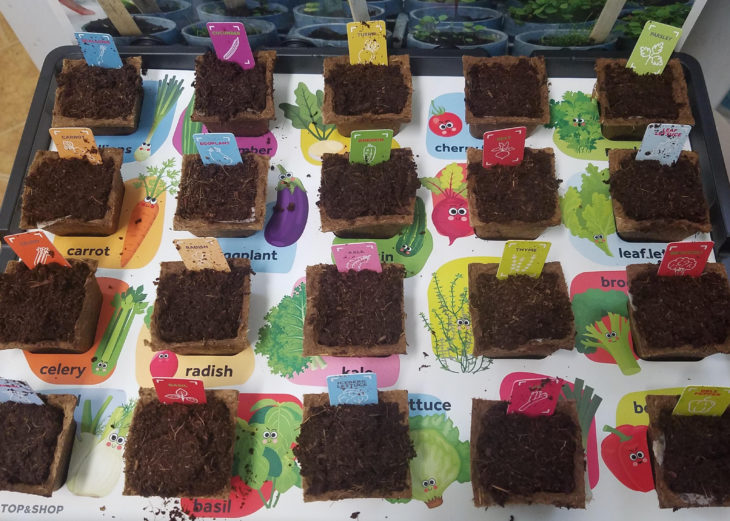 I wasn’t going to do it this year. I have a toddler and infant, and adding a garden into the care-taking mix was not going to happen. I’d have to build beds, pick out vegetables, deal with the garden center in quarantine…

Then came Stop & Shop, my local grocery store, and The Garden Tower Project.

Last month, Stop & Shop launched its first Grow & Learn program to teach children how to grow and nurture their own vegetables and herbs. I picked up two kits (a growing tray, seed starters, and activity booklet), with plans to store them in my cold, dark utility closet so the kids and I could plant them next year. I believe the supermarket’s goal was to have kids pickup a few pods every time they visited the supermarket, but with COVID-19, they didn’t seem to be leaving the store as fast as workers expected. So I was handed an entire box of 60 seed starters and four trays, then sent on my merry way.

Only a day later, I received an email from The Garden Tower Project, which sells specially designed vertical garden containers that allow gardeners to grow up to 50 plants in four square feet. I had won third place in its recent Facebook contest, which nabbed me $100 off the $489 container system (which had recently been reduced to $359, making it a total of $259 if I chose to purchase one). I debated back and forth, as it was pricey. I contemplated instead building raised beds, but there were a few problems:

I was sold on the Garden Tower, given it can be moved from year to year. Once I receive it, it will go on my sunny driveway. It also has its own composting feature, which was attractive to me, as my first go at composting hasn’t worked too well. When we moved into the house in 2013, I purchased two wooden composting bins, but the local raccoons figure out how to remove the slats to reach the tasty scraps inside! My efforts were further thwarted by a backyard vine invasion, so we gave up trying to compost a few years ago.

In anticipation of the Garden Tower arriving next week, I planted two trays of the Stop & Shop seeds yesterday.

The cocopeat expanded so much that I had a lot left over, so I used the leftovers to plant some butternut squash seeds I saved from a Misfits Market butternut squash. (Interested in Misfits Market? Use code COOKWME-VX8RNB to get 25% off your first order.) I also ordered snow peas, pole beans, and 12 different herbs from Amazon to add to the collection. I’ll probably go get some larger tomato plants from the garden center to assure I’ve got some beefier tomatoes to harvest for my favorite summer tomato salad.

I feel like I’ve planted a bit late into the season, but based on the harvesting dates on the back of the plant market, I should be good to go in September for most of the plants. Crossing my fingers.

One thought on “My First Foray Into Vegetable Gardening”