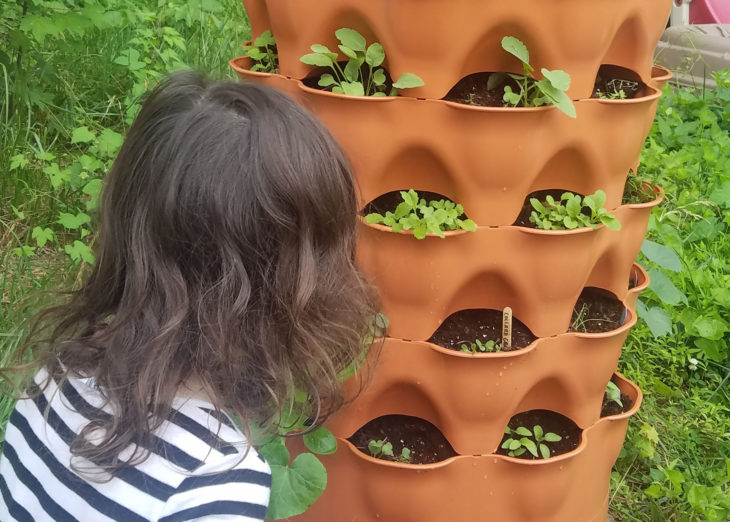 It’s been about two weeks since I set up my Garden Tower 2, and so far, all the seedlings have seem to have taken well to their new home. Particularly happy are the tomatoes, cucumbers, peas, and squash. The lettuce, while growing, looks a bit sad due to the constant 80°F-plus temperatures we’ve been having the past few weeks. 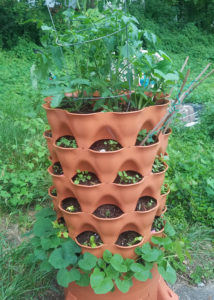 My husband cut up a bunch of invasive Norway maples in the yard a few weeks ago, so I used the skinny-yet-strong limbs to stake up my peas with some green jute garden twine.

Our 500 composting worms from Uncle Jim’s Worm Farm arrived three days after we ordered it via FedEx. I was a little put out with the delivery service, since they were left on in the hot sun on my porch when I explicitly put in delivery directions to place them in the covered wicker basket on my porch. Luckily, the red wigglers and European nightcrawlers seemed no worse for the wear. 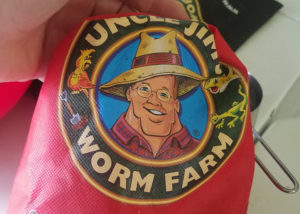 Both species of worms arrived in their own desperate cloth bag, burrowed in some nutritive peat moss to keep them alive. The flyer that came along with the worms said that they might not be moving, but to give them a little water. However, both batches seemed to be as happy as could be, and we added them to the Garden Tower compost tube, which had already been collecting a few days’ worth of kitchen scraps, torn paper bags, and paper towels. We checked in on them a few days later, and all the “Lowly Worms” (as my Richard Scarry-obsessed two-year-old daughter named them) were plump and doing their vermicomposting job. 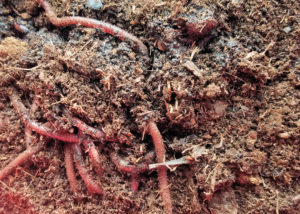 My daughter was absolutely horrified at my husband threw an apple core in the kitchen trash, and scolded him: “DADDY! Don’t throw away the apple bones! We need to feed our wiggly worms!” 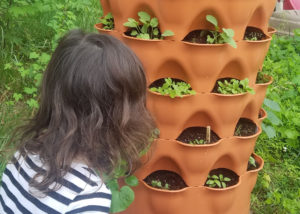 She absolutely loves the tower, but she isn’t exactly gentle with the plants yet. We may have lost one butternut squash to rough handling. She also pulled out the screen that separates the compost from the water drawer, and it was a bit difficult to put back in, as the compost started dropping. It wasn’t fully turned by the worms yet, so I had to collect a bunch of it to slide the screen back in. I returned the compost to the top of the compost tube, which is getting harder to access as the tomato plants grow.