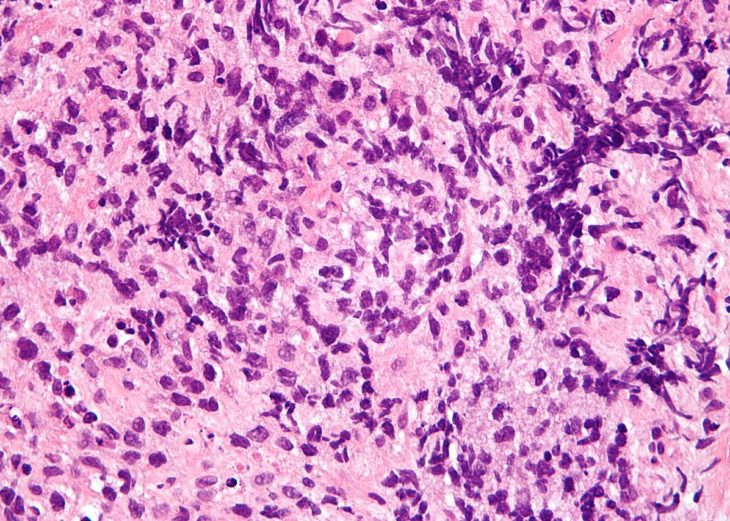 I was 22, with no previous cancer history, and no family history of blood cancer (lymphoma or leukemia). My symptoms included recurrent strep throat and bronchitis, persistent cough, shortness of breath, fatigue, itchy skin, and hair loss. Was treated for asthma and bronchitis before being sent in for an x-ray to check for possible pneumonia, when it was discovered I had enlarged lymph nodes throughout my chest.

I was diagnosed by Memorial Sloan Kettering Cancer Center and Stony Brook University Hospital. I had a large tumor behind my thymus gland, which was causing the shortness of breath. There were smaller, dispersed tumors in lymph nodes on both sides of my chest cavity. I ultimately decided to go with treatment at Stony Brook, where I was treated by Dr. Douglas Gladstone.

A port-a-cath was put in my chest for intravenous access, and I was treated with the R-EPOCH chemotherapy regimen. The medicines included rituxin, doxorubicin, etoposide, vincristine, cyclophosphamide, and prednisone. This involved an inpatient, 96-hour drip every three weeks, twice-weekly complete blood counts, and PET scans every two chemotherapy cycles. I received blood transfusions if certain counts were too low or I had a fever/infection, and received 10 transfusions. My treatment started in July 2005; the tumors disappeared and I went into remission after the second cycle, then finished treatment in November 2005.

I had plenty of other medications, including a Lupron injection to temporarily shut down my ovaries before treatment, a Neulasta injection after every chemo cycle, Compazine and Emend for nausea, iron supplement, and non-aspirin/non-acetaminophen pain relievers.

I received PET/CT scans every three months for the first two years following the end of treatment, then twice yearly for following two years, then once yearly two more years after that. I still see my oncologist once a year for a blood test and checkup.

I have been cancer-free for nearly 15 years now, and the chance of occurrence is slim to none. I do have long-term medical issues that could be attributable to cancer treatment, but aren’t definitively so—including neurological, gastrointestinal, and arthritic issues. I was told I was never going to have children, but have since given birth to two children with no intervention.

Cancer can be a very scary thing, but the best way to get through it is support and proper care. If you have any questions, feel free to e-mail me at amanda@thefrazzled.com.

Haze from the West Coast wildfires reaching New Yo