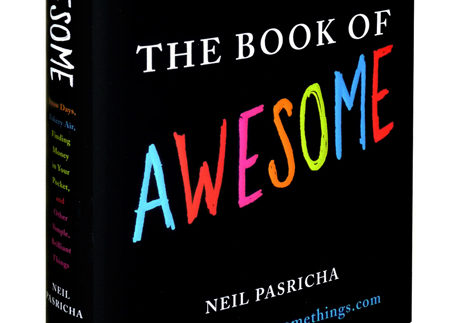 We’re in trying times right now—a pandemic, political unrest, and economic uncertainty, to name just a few. If I need a quick cheer-me-up, I reach for my copy of Neil Pasricha’s The Book of Awesome, a compendium of things that are, well, awesome! Think illegal naps (hard to come by these days with a toddler and an infant) and popping bubble wrap. (If you don’t have a sheet, you can always try doing it virtually.) Each page turn gives me a grin from ear to ear, allowing me to forget about the crap going on outside my front door. From the publisher:

From neighbors with pools to ordering off the menu at fast-food restaurants to fixing electronics by smacking them, The Book of Awesome takes on life’s sweet feats with all the honest humor and winning enthusiasm that has earned Pasricha’s blog its millions of followers. But while powered along by Pasricha’s distinctive, fresh, and hilarious voice, The Book of Awesome isn’t about one man’s favorite things, but rather a catalog of the universal little pleasures we all share. With its focus on the many things that bring us together rather than the few things that split us apart, it’s a book that will appeal to people from all walks of life—housewives and college kids, children and senior citizens alike. Arising out of Pasricha’s riffs on popping bubble wrap and getting a trucker to blow his horn is an unexpected, genuine sort of inspiration, as The Book of Awesome offers up a hearty cheer for all the little things we take for granted.

It’s also one of my go-to gifts if someone needs a pick-me-up, such as my friend who was bed-bound while recovering from surgery. And what’s better than one book? Three! This edition is followed by The Book of (Even More) Awesome and The Book of (Holiday) Awesome. There are also companion books to the series, including journals, which can be found on his website.