Whoa! I found a toy in my cereal box this morning. I don’t think I’ve seen one since the late 1990s, when prizes seemingly moved to online redemption codes and mail-in rebates.

I knew something was different about my new box of Frosted Mini Wheats this morning when I picked it up and heard a thunk against the cardboard. I curiously opened the box to find a package with a plastic Patrick Star from The SpongeBob Movie in it.  You hang the Bowl Buddy on the side of your bowl to watch you as you eat. 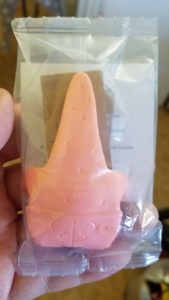 One thing that separated this toy from the memories of my youth: It was on the outside of the cereal bag, instead of inside. How many of you fought your siblings for the Matchbox car at the bottom of the bag? Then you ate the Froot Loops your grubby hands fished through to get to the prize. (Mashed says this changeover happened after the toys in the bag became viewed as choking hazards.)

I didn’t open the bag yet and will probably give him to my daughter—other entrepreneurs are selling them on eBay for $4 each. I don’t need a fat starfish judging my meal choices.